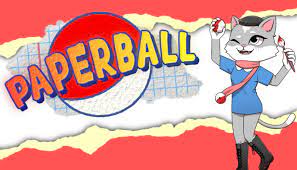 Paperball is inspired by the game Super Monkey Ball, but instead of monkeys, they replaced it with talking cats. There is nothing complicated with the game and its goal: Just balance the roller ball on the surfaces and never let it drop! You will encounter different challenges along the way and be backdropped by 10 paper-crafted environments. You can either play it safe or risk it all, but one thing’s for sure: If you like Super Monkey Ball, then you will like Paperball better.

Paperball is a relatively new game. It was released by Cliax Games in 2020 and became the company’s most successful game to date. Maybe it was Coco the cat and her cute backstory of how she came up with Paperball, or just the fact that the concept is so simple it’s addicting! Either way, the backstory and the simplicity just made everything better.

This video game is available on Steam for PC and on the official Nintendo website for Switch.

Paperball has rolled into Nintendo Switch as Paperball Deluxe. It was met by mostly positive reviews on Steam with many patrons thinking that it has surpassed Monkeyball in every imaginable way. In Switch, the stages are increased from 150 to 250 and along with its other features, may take up to 493 MB of space.

About the Developer of Game

Paperball is a masterpiece of Cliax Games, an independent video game development company. Cliax is headed by Lukas Kneringer, otherwise known as DJ Coco. (Yes, that’s also where Coco the cat got her name.) DJ Coco actually gets help from various freelance programmers all over the world. Their mantra is to make games that they themselves want to play.